This fruit is native to tropical America probably the so-called “West Indies”, but is also grown in other tropical and subtropical regions of the world, including India.

In the United States, the tree is cultivated and its fruit is found mostly in Florida, in addition to other regions.

When we talk about the uses of Graviola, we mean the whole plant, fruit, and flowers.

Since all of them obtain medicinal properties, although, its antibacterial and antitumor benefits stand out.

Related article: What kind of herbal tea is good for blood pressure?

Graviola is a plant that for decades has become famous thanks to its incredible medicinal properties, especially to cure cancer, as well as the leaves for weight loss, are very good.

Its exterior appearance is somewhat strange, characterized by its green color and a few species of barbed, but inside this fruit is white and with a soft and sweet pulp.

This fruit is rich in vitamins (C, B1 and B2) and minerals such as magnesium, potassium, copper and iron.

Also, it has a high fiber content, which helps fight constipation.

But, that’s not all, the benefits of Graviola leaf are so many.

Which, have been proven with various scientific studies and gradually, are being reported to the world.

However, more and more experiments come out every day, to check and try to synthesize their properties.

Recently, some researchers said that Graviola leaves have a great effect in treating various types of diseases – even the most complicated ones.

Yes, it is finally revealed that Graviola leaves offer you tons of benefits for your body.

These are the health benefits you could get from soursop leaves.

Thanks to its content of linoleic acid it is considered that Graviola leaves help to lose weight, as they detoxify and cleanse the digestive system; added to this, they reduce anxiety about eating, but they also reduce triglycerides and increase the amount of good cholesterol (HDL) in the blood.

However, more studies are needed to ensure that these claims are conclusive.

Various research has found that these leaves contain compounds.

Which are able to prevent the progression of various types of cancer and tumors, and also prevent their onset.

Although it has been claimed on the net that Graviola and specifically Graviola leaf tea cures cancer, this claim has not yet been confirmed by scientific means.

In this sense, a first study by scientists from the Oxford Academy suggests that fruit and tea have a chemopreventive and therapeutic potential in cancer treatments.

Although they reject conclusive results and point to the need for more research in humans.

These antioxidants help people stay healthy. So, according to a study, Graviola extract has many compounds with antioxidant capabilities.

Graviola leaves contain a lot of vitamin C, which will be very beneficial for releasing antioxidants that can fight free radicals.

Free radicals can cause many problems for your skin’s health associated with signs of aging such as wrinkles, fine lines, and intense pigmentation that can affect your overall appearance.

This antioxidant will protect you from those symptoms, therefore, you will have more confidence than before.

The body needs to be purified internally and externally, and this infusion will help you. So include it in your diet.

If you’re diabetic, drinking this infusion half an hour after each meal will balance the amount of sugar in your body.

Two studies applied to rodents confirmed that Graviola is ideal for lowering blood sugar and that even mice with diabetes had shown a 75% improvement in their sugar levels, which would help stabilize it, accompanied by a healthy diet and regular exercise.

The consumption of Graviola is not indicated for pregnant women, people with mumps, canker sores or wounds in the mouth.

Since the acidity of the fruit can cause pain.

It should also not be consumed by people with low blood pressure.

As one of its side effects is to lower blood pressure.

In addition to this, hypertensive people should talk to the cardiologist or a nutritionist regarding the consumption of Graviola.

Because this fruit can interact with the medications used and can even greatly decrease the pressure.

Is it true that Graviola tea cures cancer?

In 1976, the U.S. National Cancer Institute conducted a study on the cure of cancer through Graviola Leaf.

The results that were obtained left in puzzlement and astonishment to the researchers.

It was first investigated that parts of the tree had the largest amount of organic compounds capable of fighting cancer.

The stem and Graviola leaf were found to possess them in greater proportion.

Later in time, it would be discovered that this tree had a compound that made it ten thousand times more effective than chemotherapy: anonaceous acetogenins.

Graviola is said to cure cancer, especially cancers such as colon, prostate, pancreas and lung cancer. 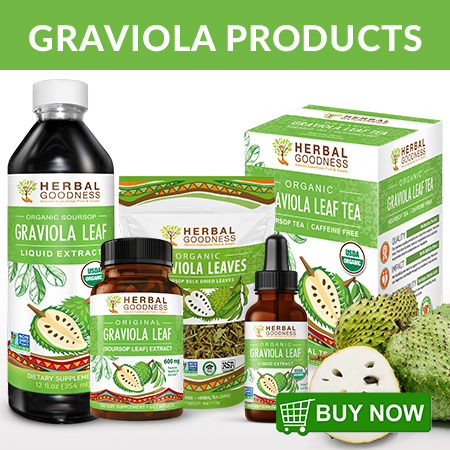